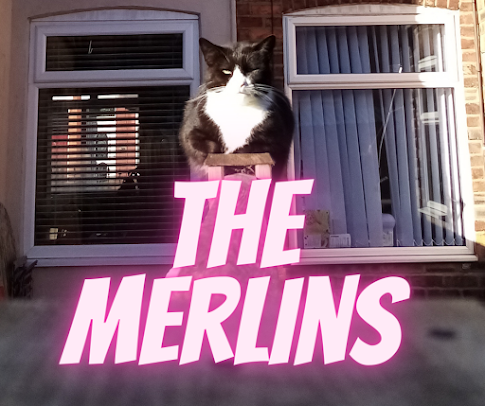 Quick content warning: there's discussion of pet death in the latter half of this post. Not too heavy, but if that's a difficulty for you, maybe skip this post.

This handsome chap is Merlin. He lives at the back-opposite house to ours and spends significant amounts of his time as a sort of feline sentinel for the ginnel between our streets. He stands on the fence, or lies Sphinx-like on the flat top of the shed, and watches the comings and goings of the alleyway. He's not particularly friendly, at least not with me, but I always say hello. He glares at me as if to say; I'm on duty here, I'm a complete professional, and that's fair enough I suppose. We hear him miaow occasionally when his shift is done and he wants to head back inside. It is a loud and proud howling voice very much befitting his stature.

He's a rescue cat from the Manchester & Salford RSPCA and we know this because Hannah did his home visit. This is one of her volunteering roles (during non-Covid times, of course) where she visits the houses and flats of prospective adopters to check living arrangements and to dispense care advice - a brilliant service that really imports the seriousness of obtaining a living creature for cohabitation. There needs to be more of this kind of thing. It's all too easy to stroll into a shop, or onto a website, and just buy an animal like an ornament for the mantelpiece. And then, whoops, you get the thing home and it treats your sofa as a giant chew toy, your bed as a toilet, and then it goes out and gets itself pregnant. This is reason #34203 for always going to rescues: they are infinitely more concerned with the welfare and complexity of the animal rather than with profit margins.

So, Merlin is also a lovely talisman for a job-well-done by folks who seriously care about the lives of animals. He is but one cat in a feline dominated street. There's friendly Jack, who was our first visitor when we moved into the neighbourhood six years ago, there's Jingles 1 and Jingles 2 (not their real names), who dash about and sharpen their claws on the trees, and there's Caramel who patrols a strip of front gardens and often sits on our outside window-ledge. Caramel is getting friendlier with me and sometimes allows a few quick strokes. She has this funny little sub-vocal mew that makes her seem all shy and demur. But we've caught her scrapping with other cats from further afield so she's clearly got a mean-streak.

I can see Merlin from my study when he's on the watch. I am the one who watches the watchcat. But there is a second Merlin inside the study with me, printed on my custom-made mouse-mat. This is the Merlin of my childhood home, my best feline friend for about a decade and even though the two Merlins are completely different in demeanor, I like to think of the current one as a kind of reincarnation of sorts; a gentle, abstract, ethereal link to my youth. The Merlin of childhood was a very friendly soul, one of these flirty cats who had time for everyone who passed the house. He had a purr to topple mountains and greatly enjoyed burrowing himself under duvets. My brother and I spent a fair bit of time protecting him from our autistic sister who treated him like a squeaky teddy bear, squeezing him to make him miaow. She couldn't help herself, but Merlin soon grew wise to it and didn't mind so much. He was a champion among moggies, a proper part of the family, a cornerstone in my construction of a deep love for animals.

I remember when he died. By that point I'd already moved away to Manchester, had met Hannah and we were solidly into our relationship. We'd been to the cinema, had seen something we had very much enjoyed, and I turned my phone back on to a missed call from Mum. I called her back, all chipper and cheery, and she told me that Merlin had been found dead that morning in the neighbour's front drive. Rather mysteriously, there was a single hole in his head like a puncture wound. Mum guessed a passing dog or fox had attacked him, but there were no other marks or signs of struggle. All of which is very curious, and makes me think of True Crime documentaries now, but back then I just felt something heavy drop away inside my throat. I was, very suddenly, in floods of tears. I don't cry very often so I tend to remember the moments when I do, and this instance is etched very clearly in my memory. I can still recall exactly what street we were on, and I know that I turned to Hannah and just buried my head in her shoulder and sobbed. The tears were a complete surprise, and I was fine shortly after, but the news hit hard in that sudden moment.

Pet deaths can be surprisingly severely felt, even if we can feel shy in admitting it. There is something about the constancy of a pet's presence and the mutual dependency of the relationship; the animal for its sustenance and the human for companionship and the link to nature. These latter run much deeper than we often consider and their sudden removal from our lives can be a sharp and shocking exposure to the yawning void of death that we spend so much of our mental energy avoiding. But it's more than that. Like the daemons of His Dark Materials, we intertwine complex links with our companion animals, such that we often project a lot of our own lives and personalities on them, like they are little repositories of ourselves; spirit vessels or votives for Mother Earth. Such projection feels like a fundamental element of the nature of human beings, the basis of so much of what we do, think, and create, and pets are that totemic behaviour in its purity. Like I've already mentioned on this blog, I have problems with the term 'pet' because it implies something frivolous and passive and meaningless and cutesy. 'Companion animals' (the term officially preferred by the RSPCA) gets closer to the truth but is clunky and oddly cold when used. I can't offer a better alternative: best animal friend? Daemon? Cohabitor? Nothing quite gets to both the mystic seriousness and silliness of the arrangement, so 'pet' wins out by virtue of its ubiquity. But there are many, many people out there who need to seriously reconsider their parameters for pethood. What is this creature you have brought into your abode? What do they need, what do they represent? Are they important enough to be your totem, and your representative? And vice versa?

The third Merlin is, of course, the one that looms behind the names of the current and former cats of this post. Merlin the Arthurian wizard, the one who moved the rocks of Stonehenge with his magic and arranged them just so. The trickster enchanter who counselled the legendary king at the court of Camelot before succumbing to the Lady of the Lake. Perhaps that is the role of the current Merlin as he sits proud upon the back gate observing as we take out the bins and bring them in again. Perhaps he is offering wise counsel. Perhaps he is casting subtle spells. Or none of that. He's just a cat doing catty things, and when he passes away the cohabitors of his court will remember his significance and feel it deeply. There's some kind of dark magic in that too. 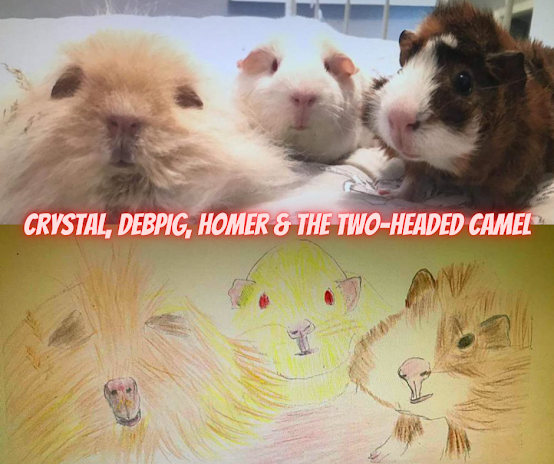