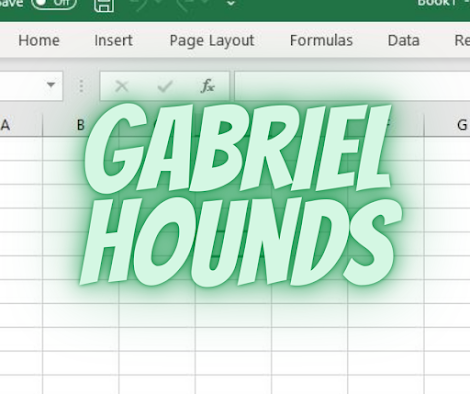 A dearth of animal encounters yesterday, largely because I have started a new job and so am chained to my computer and confined to my study. I considered squeezing out a blog-post about the computer mouse (why is it a mouse? What's up with that?), but I doubt anyone really wanted that, least of all me. So, instead, I used Microsoft Excel to help me generate a random number and turned to page 227 of the Encyclopedia of Magical Creatures, as featured in a former post. I landed upon 'Gabriel Hounds', who are deadly cryptids from British mythology who visit the houses of sick people as a sign of imminent death. I therefore present to you this prose-poem thing about the work ethic of these death-beasts and their boss. Views entirely my own.

They say hell hath truly arrived when the hounds need a spreadsheet.

When they lope up to Gabriel, tails between legs, and implore him to download Excel.

Hell hath truly arrived when Gabriel, normally so supercilious, concedes to the need.

And, he most powerful, ever merciful, must download the whole Office package and pay for a license.

Even though he loathes to have Microsoft Teams upon his person, let it be known.

The hounds get their spreadsheet and begin to enter data.

Rows of houses, columns of sickness, they input formulae for predicting death.

Excel complies. It has long known such doomsdaying. Long before it materialised.

The hounds return to their task, hiring casual recruits to help with the backlog.

They are the Gabriel Hounds, the Sky Yelpers, the Ratchets: they travel high up in the air.

They scent the deaths of the housebound and bray upon roofs, claws skittering on solar panels.

They are feasted and fattened, strong and busy; they sleep in satellite dishes.

They are monstrous dogs with human heads and they look just like your loved ones.

They are monstrous dogs with human heads and they wear fashionable coats to hide their bodies.

They are monstrous dogs with human heads and they are interviewed in the street by correspondents.

They are monstrous dogs with human heads and they reckon we don't need another lockdown right now, bloody sick of it, aren't we?

They are monstrous dogs with human heads and they land on your roof like reindeer at Christmas.

They have generated a formula for Christmas but Excel sends back an error.

It is not prepared to show the festive future, not quite yet.

The hounds find they are spending just as much time inputting data into Excel as they are acting on it.

Some wonder if it was worth their effort at all.

He is lying to you. He did not use Excel to generate a page number for the Encyclopedia of Magical Creatures, he just picked a random page this morning and embellished to make it seem like he did it yesterday. Excel had no part in it, let it be known.

And the spreadsheet is often locked for editing because Gabriel has left it open in his mind.

And sometimes Gabriel ignores his DMs, as is his prerogative

So they have to make copies of the spreadsheet to edit it and then paste those edits back into the original.

Which is just annoying.

The hounds are worried some deaths are going unrecorded. Growl, yip, whine.

Gabriel will be most irate. But it is not their fault.

No. Gabriel stares at the space around the blank Word document, willing it to inspire him.

You are being lied to. He didn't pick a random page this morning, he chose page 227 quite deliberately because he already knew a little about the Gabriel Hounds, having been previously interested in this fragment of folklore. Truth was, he made zero effort to have a meaningful animal encounter yesterday. And he is tired this morning because he stayed up too late playing Tetris 99.

Gabriel sees an opportunity now that he has downloaded the full Office suite. He sees it as a sign.

One day of his celestial week he will set aside all deity matters and write poetry.

The hounds howl in his DMs but he ignores them. He can see they have plenty to do.

Gabriel has long desired time to write his poetry, reflecting on the life and times of immortal beings.

At many an idle moment between smitings and annunciations, lines of verse have formed inside his mighty mind.

But now this. Blinking cursor. Choice of fonts. Left align.

Gabriel opens Outlook, and it all collapses.

The hounds are silenced.

They have realised something.

They are monstrous dogs with human heads and they have realised something.

Why do they bark and growl and bray and whine and howl?

Why don't they talk and chat and whistle and sing and laugh?

They look at each other, monstrous dogs with human heads.

They find fashionable coats to hide their bodies and talk to news correspondents in the streets.

They use their human voices to say they don't think we need another lockdown right now, bloody sick of it, aren't we?

They think they are being clever. They think more death will mean more work.

The hounds decide that hell hath cometh and they need a spreadsheet.

They have forgotten that they already have one.

They lope to Gabriel to ask for help.

Gabriel has gone. He is trapped with the Draft folder, unsent.

In his place sits Excel.

Lies, lies, lies. It was not Tetris 99, it was Superhot. That metafictional, postmodern game about game playing. The game called him a dog. An obedient dog. He is an obedient dog. A good hound. A good boy.

The hounds no longer exist. They never did. They were an entry in an Encyclopedia, that was all.