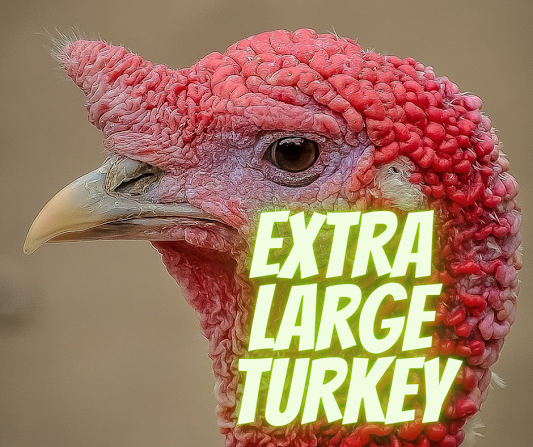 Let's talk about Christmas. Come on. Let's just do it. It's lurking there in our peripheral vision, drooping and thirsty, like an end-of-the-line tree losing all its needles and baubles. I was in an ASDA yesterday for the big shop, and while Halloween was still the headline, Christmas was there in its mass-produced shadow, desperate to burst out and flounce around on centre stage, like it does. There were selection boxes, cut-price mega bottles of spirits, bags of chocolate sprouts. I spotted a couple of reindeer, a few santas, a twinkle of tinsel. And there, in the frozen aisle, the depressing sight of engorged turkey carcasses piled on top of each other, straining against their shrink-wrap. It's beginning to look a lot like the holidays are coming and the weather outside is frightful. The problem is, its not just the weather that looks bad.

It's going to be a tough festive season. Tomorrow is Halloween and I've already seen multiple houses in the neighborhood decked out with streamers and skeletons and plastic pumpkins. I can only read it as a grand fuck you to the coronavirus and its lockdown acolytes. The advice around Trick or Treating has been, like everything else, extremely bloody fuzzy and barely mentioned, so I fully expect the be-costumed tykes to be out in force. And, yes, there's part of me that says I can't blame them because we all need our light relief and our rituals at the moment - Hannah and I are planning a night in with cocktails, hotdogs and a scary movie of some kind. But the more sensible part of me thinks we should have nailed Trick or Treating away in a coffin and sacked it off for a year, and then chucked Bonfire Night in there too. And might there have been room for Christmas too?

The supermarkets say an exuberant no. The supermarkets suggest it'll all be pretty much business as usual. I have a sneaking suspicion that this general attitude of the supermarkets has contributed to a wider downplaying of the seriousness of the situation. No doubt the advertisers will push a similar agenda, but with an excruciating glaze of new-normal, all-in-this-togetherness. I'm anticipating Amazon billing themselves as The Great Festive Saviours as shopping habits migrate more fully online, while John Lewis are no doubt rubbing their hands with glee at the mawkish, wholesome gift that has been handed to them. Beneath it all will be Christmas as a fundamental bedrock upon which we build the rest of our existence, followed swiftly by Christmas as the reward for our endurance of a COVID-ravaged year. There has been mutterings of the latest stuttering lockdown being for the eventual benefit of Christmas, but ho ho ho, that particular sleigh has already sailed, I imagine. Given the acceleration, we flat-out should not be having our 'normal' Christmas. We should not be gathering with Granny to feast on fowl corpses and exchange pleasingly-shaped chunks of plastic destined for landfill.

But we cannot escape it because it is already here. The turkeys have been fattened, slaughtered and frozen and the advertisers will have their footage already in the can of the free-range cluckers enjoying life pre-throat slit. And while you might just be able to apparently get away with taking free meals away from starving children, no government can survive a canceling of Christmas. So it will happen. The Coca-Cola trucks are refueled. But can we imagine the festivities differently? Can we look upon this particular bleak midwinter from a new perspective? Can we put up a roadblock and send the trucks away?

A few years ago, Hannah and I decided to own our Christmas Day. We took a step back from the gathering-with-family thing and spent the day on our own in our house. This wasn't necessarily because we have beef (roasted or otherwise) with our families - very much the opposite - but we saw Christmas Day and its peripheral hours as preciously rare moments of freedom. We now use the day to eat, read, play, watch, and last year we went for a walk. It is bliss. A throwing-off of the shackles of sociality and an embrace of the fun stuff of domestic life. Of course, this cannot be the case for everyone, and it comes along with an immense amount of privilege (and a lack of children, which no doubt helps), but it might serve as a vague template for alternative possibilities. This could be a year to shrug away the burden of Christmas for once and see it, instead, as a bunch of days to just do some fun shit. Read a massive true crime book. Try your hand at writing comedic poetry. Sketch your loved one in the nude. Sketch yourself in the nude. Learn a dance routine. Try creating an entirely vegan three course Xmas meal.

Woops, slipped that in at the end there didn't I? It's too late for the turkeys, of course it is. But if we're not gathering in our masses this year, and if we follow the guidance to stick to our households and bubbles, perhaps we can re-conceive the feast we prepare. Perhaps we can send a message to the meat industry at this most meatiest time of year: we don't really need to do this on such a big scale. We can find alternatives. We can think outside of the meat freezer box. OK, so that's my challenge, pathetic and wearying as it might sound: try a vegan Christmas. Don't wait until Veganuary, start early and embrace the weirdness of the year with a weird yuletide. Invent new rituals. Reclaim the season from what the supermarkets want us to do, have yourself a merry little Coronamas, may your heart be plant-based.