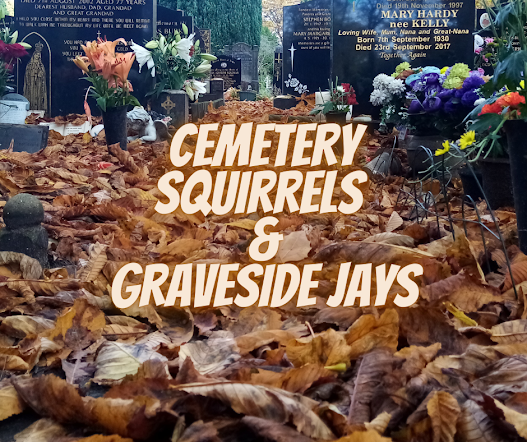 Half an hour's run away from our house lies the UK's largest municipal cemetery, the Southern Cemetery in Chorlton. It is a vast place, with graves and tombs as far as the eye can see, ranging from your fanciest granite obelisks and mausoleums guarded by stone angels, to unmarked paupers plots. There are a few famous folks buried here, including Manchester's favourite artist LS Lowry, Manchester's favourite record producer Tony Wilson, and Manchester's favourite football manager Sir Matt Busby. Basically, anyone who Manchester claims as their own tends to end up in Southern Cemetery and, to be fair, its not a bad place to wait out one's deathly eternity. It is also an excellent spot for an autumnal stroll given the abundance of trees, so we met a friend there yesterday and crunched our way through the carpet of leaves.

Hannah and I have a bit of thing for cemeteries. We often include a visit to interesting ones on trips abroad and my desktop background is still a picture of a deer encountered in Vienna Central Cemetery in Austria (the location of one of my favourite shots in cinema history, incidentally - the closing scene of Carol Reed's The Third Man). We find them to be peaceful, humbling, amusing, and fascinating places where life seems to pause for a while as it is thrown into various perspectives. They also tend to be overflowing with nature where all manner of trees and plants and creatures can be found. I think there's something about cemeteries as places where humans just calm the hell down for a bit that allows certain suburban animals to find a haven among our chaos. I'll always cherish the memory of Hannah and I chancing upon a red squirrel in Berlin as we strolled through a random cemetery somewhere on the outskirts. The little fella led us through the place like some spirit custodian, some totemic guardian of the German dead.

The squirrels were out in force yesterday at Southern Cemetery, scurrying around like they owned the damn place. Grey ones, of course, but I've trained myself not to look upon them with disdain for their supposed persecution of our native reds, because such mythologies only feed poisonous ideals concerning which creatures belong and which don't. Squirrels are pretty awesome dudes whatever the colour, even those who spoil bird-feeders. I am rarely not bewitched by the flicker of their misty tails, or their death-defying leaps from treetop to treetop. Let me start a new ritual: say hello to the squirrel and the rest of your day will be charmed with good cheer and industrious fortune.

The good cheer was rewarded immediately yesterday when I spotted a jay darting through the leaves. I love spotting jays and have become quite good at it. They are the most spectacular member of the corvid family, like jazzier, sassier, more glam-rock magpies. They have this super-cool eyeliner going on, and a suave colour scheme ranging from mauve to electric blue. They're shy birds, often seen on their own, and don't tend to be as cocky or as obvious as their fellow corvids. Like the Berlin squirrel, we managed to follow this Manchester jay for a while as it swept along the grave rows, alighting on headstones and overhanging branches. It landed and drank from a puddle, shifted a few leaves as it hunted worms. It did not seem too perturbed by our presence, or our cooing over its beauty. Perhaps it thought we were there to grieve and so gave us a free pass to gawp and ogle all we liked.

We were not there to grieve - we do not personally know any of the thousands buried in this place. But we very much enjoy letting the gravestones tell their own stories of the interred. We passed one from the 1930s which informed us that the young man buried there had drowned in Blackpool, while another more recent plot was festooned with dreamcatchers, wind-chimes, twirly coloured glass things and angry signs tell us not to touch anything and not to park our cars here. We found a few Hartleys, and various other names I wanted to borrow for characters in future stories. I particularly enjoyed the variety of euphemisms for death; just sleeping, just resting or, my favourite from yesterday: 'Peace, Perfect Peace'. Which I guess is not really a euphemism, but I was amused by the tone of exasperation and relief it evoked.

All the stories of the world are contained in cemeteries. My talented friend Tania Hershman recently concluded a writing residency in Southern Cemetery and produced this excellent radio documentary about the place. She does a wonderful job of capturing the atmosphere and tone of the cemetery, while also conveying how these sacred grounds continue to connect in strange and meaningful ways to us postmodern humans. Tania seeks out the graves of single women who are unattached to men - be that husbands or sons or brothers. Such encounters are a rarity and I now keep an eye out for them whenever strolling by graves. I think I spotted one or two yesterday, gave them a little nod of recognition.

Conversation drifted, as it often does in these spaces, to the manner of our own burials when the time comes. I'm undecided, but I don't think I want to be in a cemetery like this one, as much as I like them. I have something more rural in mind - scattered ashes on a hillside or some sort of eco-burial beneath a tree. It might depend upon what is deemed greenest when the time comes, but whatever it ends up being, I hope there'll be a jay nearby, and a few regular squirrely visitors of all hues. Throw in the occasional urban fox and wild rabbit and I'll be as happy as a worm in soil. If there's to be a headstone or marker of some kind, let it read: Here lies Dave. He thought jays were glam-rock magpies. And now he's dead.